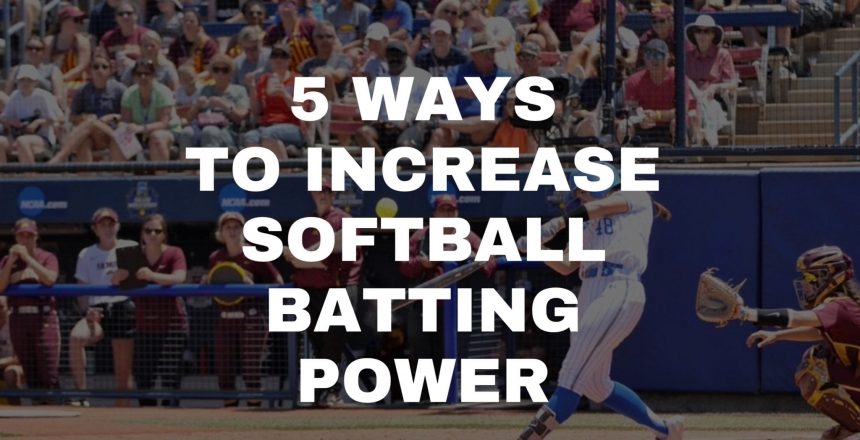 How do you increase softball batting power? Every fastpitch player wants to hit the ball harder and get a few more extra base hits each season.

But what many players don’t realize is just how important their workouts are–power is built in the weight room.

Improving batting technique is a BIG part of increasing power, but so is gaining more strength, size and explosiveness in the weight room. Becoming a successful hitter means putting in a lot of time in both the weight room and on the batting tee.

In this article, you’ll learn some of the top exercises for increased hitting power. When performed with proper form, consistently, over a long period of time, any fastpitch player can add MPHs to her exit velocity (how hard the ball leaves the bat) and thus her extra-base hit production.

Click anywhere in the table of contents to jump to that section.

Where Does Softball Batting Power Come From?

In softball, the swing quality of a hitter’s swing is priority #1–a good swing maximizes the power a player can produce.

The key here to remember though is “functional” strength–not all exercises are created equal, so we want to remember that training smart is just as important to training hard. For a fastpitch player to be as good as she can be, she needs to allocate her time wisely and be efficient in the weight room.

Since we are going to help you get strong and powerful, let’s quickly discuss the main muscles involved in a great softball swing.

Lastly, though I’m not listing it as a key muscle, the upper body is huge for hitting the ball harder. Most softball players need way more upper body strength, and it’s not limited to just one specific muscle group.

In the swing, the hips are the first muscle group to accelerate and reach their peak rotational speed.

After the hitter completes her stride, her hips begin to rotate toward the pitcher. They’ll reach their full speed, then the torso will reach it’s full rotational speed, then the lead arm, then the hands and finally the bat.

This is called a “kinematic sequence,” and also represents that’s called a “kinetic chain,” as energy is produced and transferred from one body part to the next.

Strengthening all the most important body parts and muscle groups in this kinetic chain is really important, and that’s what this article is all about.

Will A Small Fastpitch Player Get Stuck as a Bunter or Slap Hitter?

Many smaller players become limited early on in their fastpitch career. If they’re not big and strong enough to power the ball through or over the infield, they may get relegated to bunting and slapping to get on base.

Though there is nothing bad about being a slapper or bunter–and many accomplished players are very good at these skills–it can limit a player later on. The problem is that if a player is asked to switch full-time to slap hitting early on, she may lose her “regular” swing.

Then, if (or when) she hits a growth spurt and does have the power to hit for extra bases, she may not have the swing any longer that allows for it. This is a problem!

The hip thrust and variations of it is one of the best (and safest) exercises that fastpitch softball players can do in the weight room. Here are the benefits of the hip thrust:

Go here to read more on how to do a perfect hip thrust.

Bret Contreras, a personal trainer, is known as “The Glute Guy” and has popularized this exercise. Prior to Bret’s contribution to the fitness industry, people commonly held the false believe that squats, lunges and deadlifts were the best exercises for building the glutes.

Though all of those exercises are great for building overall lower body strength, they’re a distant second at building the glutes.

Why Build The Glutes?

The glutes are a huge part of not only batting power, but sprint speed, jumping power, throwing speed and more.

Ever looked at the butts of world-class athletes? There’s a pattern there…strong, explosive athletes all tend to have very big glutes–big butts–because of their critical role in athletic movements.

Every softball player should have the goal of building very strong glutes.

Hitting is a rotational movement: the hips, torso and arms all rotate to produce power that is transferred from one muscle group to the next.

When in the weight room, traditional exercises like squats, lunges, rows and pull ups are all important.

But, to increase power in a softball-specific way, athletes should be performing some amount of movements in the gym that mimic what the do on the field.

Rotational medicine ball throws improve softball batting power because they provide resistance in the same way as the softball swing.

Not every gym will have a wall you can throw medicine balls off of. Finding a sports performance facility that can allow you to train this way, though, will make a big difference–it’s worth the effort.

The farmer’s carry should be a fastpitch staple because it builds a strong back, strong core, strong legs and strong forearms.

The hands grip the bat, and strong forearms and fingers help a player power through the ball.

Ever seen a softball player who, when she makes contact with the ball, it appears that her bat gets pushed back by the ball?

Yep. You see this in softball and baseball players–mostly in young players who just don’t have a ton of strength.

Farmers walks make the whole body stronger, and are HARD–they build mental toughness and are a great team building exercise.

Forearm strength is something that is very overlooked in softball, but your hands are what are ultimately gripping the bat.

This deadlift variation is safer and easier to perform than a traditional deadlift from the floor. It also more greatly mimics joint angles in the legs that we see in sprinting, jumping, pitching and hitting.

The Romanian Deadlift, or RDL, isn’t easy at first for beginners because the concept of “hinging” at the hips is a little weird. But, we humans both squat and hinge at the hips (bending over is a hinging movement).

Basically, players who have lots of batting power create that power in their lower half, most specifically in their hips, glutes and hamstrings. So, we want great exercises to strengthen them.

How to Do the RDL

Check out this video on YouTube, but be sure to only perform this under supervision with a qualified strength coach.

There are also other, easier RDL variations–the 1-leg RDL or split-stance RDL requires only dumbbells and less weight, but is also very challenging on the balance. This is a great variation for young players.

Start with the dumbbell 1-leg version first and get comfortable with the movement as safely as possible. Then with supervision, progress to the barbell version.

Softball Batting Power Exercise #5: Band-Assisted Pull Up or Chin Up

The king of upper body exercises is the pull up / chin up. Yes, there’s a difference (the chin up is performed with palms facing, the pull up with palms away) but for our purposes either is equally good.

Most female athletes–including college athletes–cannot do one full pull up. It takes dedication and a long term training plan to get to the point of doing one full hang, excellent pull up.

But, it’s a great goal to have and one that IS attainable, albeit with a lot of hard work.

The strongest players have the best bat speed, and better batspeed makes getting hits easier.

If you’re ready to start working consistently toward becoming a better player and improving softball batting power, then this is the place to start.

If you’re looking to learn more about softball training, check out this article arm strengthening exercises.

Got a question? Read some common ones below.

How do I get more power in my fastpitch softball swing?

The first step is cleaning up your batting mechanics–work on your swing with a hitting instructor, read up on the internet about good hitting mechanics, and watch YouTube videos. More batting power comes from strong hips, glutes, core and upper body strength. Training the glutes is critical, as is throwing medicine balls and lifting weights consistently with good form.

What is a good batspeed for fastpitch softball?

How do you increase batspeed in softball?

The following list is important in increasing batspeed in softball:
1. Get stronger! Skinny, small players won’t hit as hard as bigger, stronger players.
2. Train your grip – the forearms and hand strength is important for driving the lead hand through the ball.
3. Work on your swing – a powerful swing that doesn’t “leak” power is important
4. Use your hips more – working on proper sequencing of your swing (where the hips, then torso, then lead arm, then hands and barrel come through) is critical to getting as much power as possible out of your body.
5. Eat big and eat healthy food. To get big and strong, don’t forget about nutrition – you have to supply the building blocks for your body to grow and get stronger.

Hopefully this article on fastpitch softball batting power was a big help to you. It’s not only the swing that matters, but also the physical, functional strength of a player.

If you want to get more hits, hit the softball harder, and also get a bigger share of extra base hits, then be sure to get in the weight room and work hard. 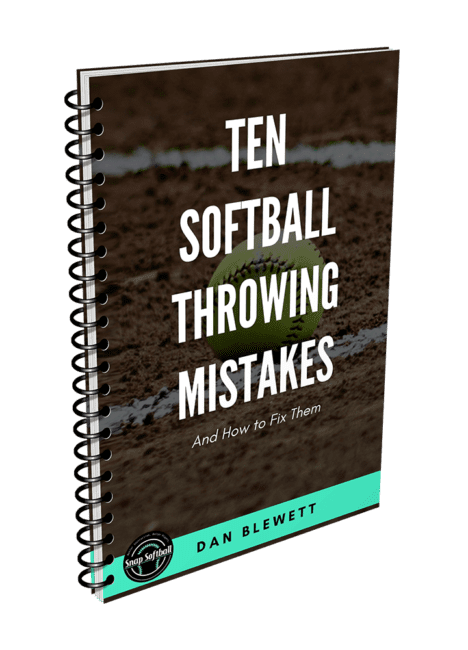 Get a Copy of My Free
Softball Throwing Ebook

If you need help with your throwing, this free ebook has tons of tips, videos, drills and insight for players, coaches and parents. 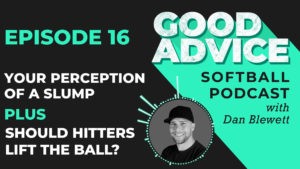 When are you in a slump? When is it more than just a bad at-bat or two, or 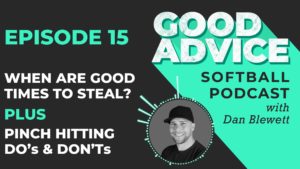 When are good and bad times to try and steal bases in softball? Plus, hitting is hard…especially when 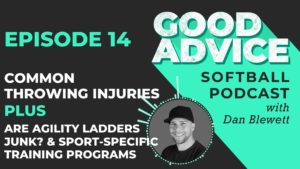 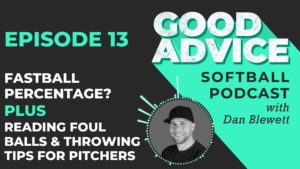 What percentage of fastballs should softball pitchers throw? And, should they increase this percentage? Dan also talks about

2 thoughts on “Softball Batting Power: 5 Ways to Increase It”